Permeabilized muscle fibers is the most widely used sample preparation technique when assessing mitochondrial function in skeletal and cardiac muscle tissue. A cooling plate was developed in an attempt to standardize mechanical separation of fibers, through close regulation of temperature and optimization of visualization. Here, we wanted to investigate if using the cooling plate would influence mitochondrial function.

No significant differences were found in any of the respiratory states determined with fibers prepared on ice versus the cooling plate when data were normalized using Ww and COX activity, whereas data normalized using CS activity were significantly different across all respiratory states between the groups when compared to data normalized to Ww and COX activity. The use of the cooling plate for preparing permeabilized fibers maintains mitochondrial function and it improves various practical aspects of mechanical separation. These improvements contributed to faster, more accurate sample preparation and increased picture quality. Further studies have been carried out using a combination of ice and the cooling plate, and suggestions have been made for improvements of the cooling plate to allow its sole use when preparing fibers. 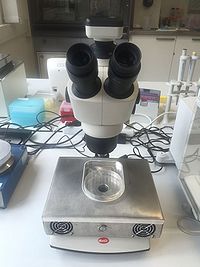 The project was supported by K-Regio project MitoFit, funded in part by the Tyrolian Government and the European Regional Development Fund (ERDF).