Delineating the physiological and biochemical causes of aging process in the animal kingdom is a highly active area of research not only because of potential benefits for human health but also because aging process is related to life history strategies (growth and reproduction) and to responses of organisms to environmental conditions and stress. In this presentation, I advocate studying bivalve species as models for revealing the determinants of species divergences in maximal longevity. This taxonomic group includes the longest living metazoan on earth (Arctica islandica), which insures the widest range of maximum life span when shorter living species are also included in the comparative model. This model can also be useful for uncovering factors modulating the pace of aging in given species by taking advantages of the wide disparity of lifespan among different populations of the same species. For example, maximal lifespan in different populations of A islandica range from approximately 36 years to over 500 years.

We compared membrane fatty acid as well as metabolic capacities (respiration rates) and ROS production from mitochondria of five species of bivalves and different populations of A islandica. Fatty acid profiles were determined by Gas Chromatography with FID detection, while oxygen consumption and peroxide efflux were assayed by high resolution respirometry (O2K) and fluorescence detection with Amplex Red®.

Our analysis revealed that either regulation or tolerance to oxidative stress is tightly correlated to longevity of species [1,2,3] but when comparing different populations of A islandica, the relationship of membrane fatty acid composition or Peroxidation Index with maximum lifespan vanishes [4]. This led us to conclude that mitochondrial membrane robustness to ROS attack is required for a species to be able to reach long lifespan but it is not sufficient at the population level to express this life history trait. 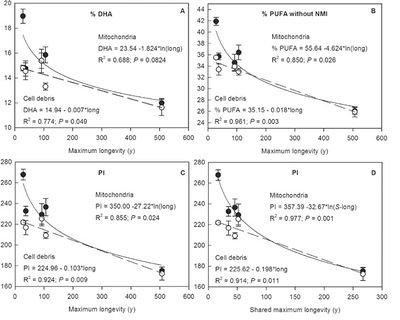 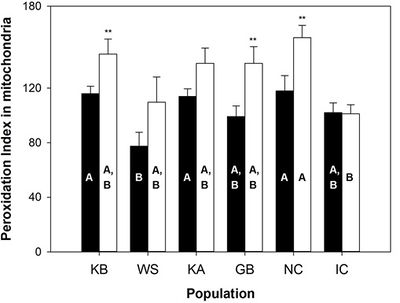