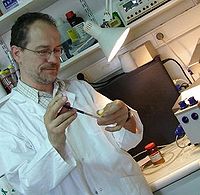 Sulfide (H2S, HS-, S2-) is highly toxic because it is an inhibitor of mitochondrial Complex IV similar to cyanide, NO or CO [1] and high nanomolar concentration of sulfide are sufficient to inhibit 50% of cytochrome oxidase activity [1,2]. However, when respiration of intact cells is measured, concentrations above 10 µM are needed to reach a significant inhibition. In mammals the metabolism of sulfur containing amino acids releases sulfide that if unchecked would be rising to micromolar values within minutes. Moreover, the anaerobic metabolism of the bacteria in the colonic lumen raises concentrations of free sulfide to 60 µM or even to mM concentrations if one considers the bound sulfide. Protection of cells and particularly of colonocytes against sulfide toxicity is thus required [3,4].

Sulfide at least in the H2S form (20-30% of free sulfide at physiological pH) is a hydrogen donor and is used by the mitochondrial respiratory system as a substrate [4,5]. The enzyme involved is the sulfide quinone reductase (SQR), associated with two other enzymes (a dioxygenase and a sulfur transferase) to release thiosulfate (H2S2O3). Initiation of SQR activity is detectable with nM concentration of sulfide. Two sulfide molecules are engaged, one molecule of dioxygen is used by the dioxygenase and one atom of oxygen by the cytochrome oxidase and thus for the same electron transfer through Complexes III and IV three times more oxygen are needed. The SQR activity was first demonstrated in colonocytes [4] but later on it was recognized that it is present in a large variety of cells/organs [5]. It is thought to reflect the need of a continuous sulfide disposal to eliminate endogenous release. Moreover, sulfide like NO or CO is though to be a gasotransmitter and SQR activity appears relevant to sulfide signaling/pharmacology [6].

As external concentration requires to be lower than 10 µM the establishment of a steady state for sulfide oxidation requires a continuous infusion of sulfide [4]. Because of the stoichiometry of sulfide oxidation this infusion increases the oxygen consumption of the cells/mitochondria even if a “normal” carbon based oxidation was taking place [5]. If the flux of sulfide (JH2S) is too high inhibition of respiration and of oxygen consumption develops quickly [5]. Therefore according to the intensity of sulfide exposure (concentration and flux) sulfide could either stimulate or inhibit cellular oxygen consumption [5]. A convenient way to express the sulfide challenge is the ratio between the flux of sulfide delivered and the respiratory rate before sulfide infusion (JH2S/JO2) indicating a relative sulfide exposure [5]. A few cell types including colonocytes tolerate values above 2 [5].

Colonocytes are adapted to maximize their sulfide oxidation capacity: 1) As in other cells sulfide oxidation takes priority over the use of other substrates [5]. 2) SQR expression and activity makes it able to saturate the mitochondrial respiratory system with electrons from sulfide [5]. 3) Differentiation of colonocytes increases the content in respiratory enzymes but paradoxically not in SQR [7]. 4) In contrast to the other cells studied so far, colonocytes use reverse electron transfer in Complex I to increase further their sulfide disposal rate [5]. However, when the sulfide exposure is too high the colonocytes switch towards a glycolytic metabolism [2].