Epithelial to mesenchymal transition (EMT) is a functional and phenotypic shift involving changes in cell morphology and regulatory cascades. Both EMT, as well as its reverse process MET is critical in embryonic development and in pathogenesis, including fibrosis and wound healing, as well as cancer. We hypothesized that metabolic reprogramming is important to fulfill the phenotypic plasticity involved in EMT [1]. Therefore we introduced TWIST, a regulator of EMT, in the immortalized mammary epithelial cells MCF10A.

The Seahorse XFe Exracellular Flux Analyzer (96w) was used to measure the respiratory and glycolytic capacity of the cells. Western blot, qPCR and flow cytometry was used to analyze mitochondrial alterations whereas the xCelligence RTCA Analyzer was used to measure proliferation. We confirmed EMT by changes in morphology, and a panel of markers of EMT (E-cad, N-cad, Vimentin).

Paralleling the EMT induction, we find an increased stem cell profile including decreased proliferation, lowered RNA content (cellular quiescence), as well as upregulation of the stem cell markers CD44, PRXXI, Axl and NOTCH 3. We observed a shift in energy metabolism towards mitochondrial respiration relative to glycolysis during EMT, but in general, the metabolic rates were reduced. Furthermore, there was increase in both mitochondrial DNA content, as well as the mitochondrial membrane potential (ΔΨm). The shift towards oxidative metabolism was associated with distinct changes in the regulation and expression of several enzymes and regulators of glycolysis and mitochondrial respiration. Furthermore, upon analysis of the acetyl-CoA carboxylase (ACC), a multifunctional enzyme complex involved in fatty acid synthesis, we find the ACCA to be downregulated, whereas the ACCB is increasing in TWIST overexpressing cells. ACCA is known to stimulate lipid accumulation in the cytoplasm [2] whereas ACCB is known to control fatty acid oxidation by means of inhibition of carnitine palmitolytransferase I [3], and thereby reduce the fatty acid uptake and oxidation by mitochondria.

In summary, these findings suggest that EMT induces both stemness in MCF10A cells and mediates a metabolic program shift with increased contribution of mitochondrial ATP production relative to glycolysis. Abrogation of the regulation of EMT, metabolism and cell stemness has been linked to tumor initiation and development. This study provides new knowledge on the potentially targetable mechanisms linking cell signaling with metabolism, under the control of TWIST. 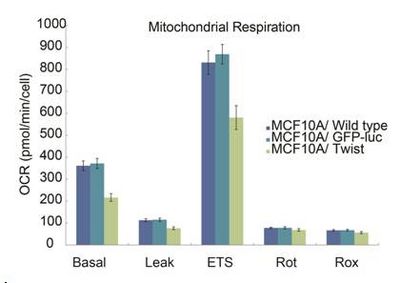 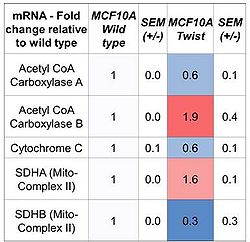 Table 1. As EMT is induced there is a shift in mitochondrial related RNA content