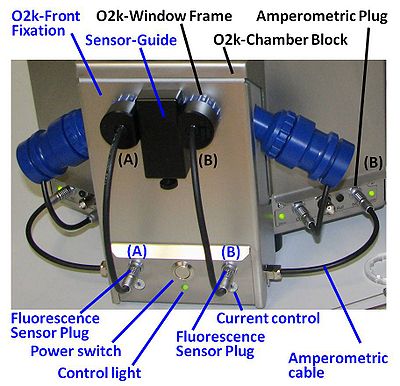 In this configuration the O2k can be used for high-resolution respirometry and fluorometry. It is not necessary to dismount the Fluorescence-Control Unit for basic HRR when a fluorescence signal is not recorded.

The light intensity of the LEDs is set by the current control, independent for each fluorescence sensor (O2k-Chamber A and B). The current is controlled by DatLab in a very wide range for optimization according to sample and fluorophore requirements. At higher LED-intensity the optical sensitivity is increased, i.e. the signal change per concentration change is enhanced. However, even moderately intensive light may exert negative effects: (i) Damage to the sample reducing the biological activity. (ii) Damage to fluorophores catalyzing degradation and various side reactions. Therefore, the LED-intensity should be kept as low as compatible with a smooth signal, i.e. when the resolution is just not limited by noise or disturbances. The values indicated in the table application specific settings are only suggestions to start with. It is recommended to optimize the light intensity specifically for each application.

Limitations: For Series D oxygraphs the LED intensity has to be set to the same value for both chambers.

For LED2-Module Series A it is still possible to set the LED current directly at the Fluorescence-Control Unit. However, this less convenient method is obsolete. The relevant instructions can be found on the discussion page in the archive.
Conversion of the LED intensities between the Fluorescence-Sensor of the O2k-Fluo LED2-Module (O2k-Series D to G) and the Smart Fluo-Sensor of theO2k-FluoRespirometer (O2k-Series H)

The gain for the Amp channel can be set in the Control Table of the Oxygraph Control window, the section “Amp” to 1, 10, 100, or 1000. The gain setting will influence the Amp raw signal recorded in Volt. See Observing the Fluorescence Signal. The amplified signal can be recorded in the range -10 to +10 V.
The gain setting should be chosen to obtain a maximum signal well below 10 V. If the maximum observed raw signal was 9 V in an initial experiment, then the gain should be reduced to avoid "off scale" (>9.99 V). On the other hand, if the maximum recorded raw signal was considerable lower than 1 V (e.g. 0.2 V), the gain can be increased to avoid limitation of resolution by digital noise.