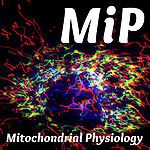 Cytosolic calcium (Ca2+cyt) has a strategic task in co-ordinating cellular work load and ATP regeneration but the mechanisms are not completely understood. Up to now the paradigmatic view was that Ca2+ after its uptake by the Ca2+ uniporter activates PDH, ICDH and α-KGDH within the matrix. However we have shown by computer simulation that these effects are insufficient to explain the in vivo results [1]. Moreover, we have recently shown that Ca2+cyt in low nM concentration range (S0.05 = 225 ± 22 nM) exclusively regulates the glutamate-dependent OXPHOS capacity (glutmate+malate) of isolated brain mitochondria (BM) via aralar [2-7], the mitochondrial glutamate/aspartate carrier. Whereas OXPHOS capacity with pyruvate+malate is only slightly influenced by Ca2+cyt we detected that pyruvate formation by the malate aspartate shuttle (MAS) is tightly controlled by Ca2+cyt [6,7]. Through its common substrate couple NADH/NAD+, the formation of pyruvate by LDH or glycolysis is linked to MAS with aralar as a central component. A rise of Ca2+cyt in a reconstituted MAS causes an up to five-fold enhancement of OXPHOS due to an increased substrate supply, acting as a metabolic pyruvate supply unit which we called “gas pedal”. In contrast, intramitochondrial Ca2+ modulates the oxidation rates only of those substrate molecules which are already present within the mitochondrial matrix. Moreover a substantial Ca2+-uptake by BM requires [Ca2+cyt] > 500 nM indicating that changes of Ca2+cyt in the low nM concentration range should not have an effect on intramitochondrial Ca2+.

Moreover a substantial Ca2+-uptake by BM requires [Ca2+cyt] > 500 nM indicating that changes of Ca2+cyt in the low nM concentration range should not have an effect on intramitochondrial Ca2+.

In a recent in silico work we developed a simple computer model comprising MAS, pyruvate production by glycolysis or LDH, tricarboxylic acid cycle and OXPHOS. It is demonstrated, that MAS is absolutely necessary for pyruvate supply and OXPHOS to take place. It is shown that a direct MAS activation can itself significantly elevate the OXPHOS flux and thus oxygen consumption. Finally, it is demonstrated that an activation of MAS in parallel with a direct activation of the remaining components helps to increase effectively the oxygen flux and to maintain intermediate metabolism homeostasis. The model helps to understand directly and intuitively the properties of the system.

We further found that the gas pedal is also a property of heart and skeletal muscle. However, the largest extent of gas pedal we detected in neurons, therefore and since neuronal mitochondria are not able to oxidize fatty acids the gas pedal is a unique property of neurons. In contrast astrocytic mitochondria do not contain aralar therefore they have no gas pedal. These cell specific differences allow to specify the contribution of neurons and astrocytes to the function of isolated brain mitochondria.

The gas pedal concept includes a hypothesis on the occurrence of de-energized neuronal mitochondria at low Ca2+cyt (120 nM) at night and of energized mitochondria at elevated Ca2+cyt (440 nM) at day as it was measured recently during circadian Ca2+cyt oscillations in single neurons of nucleus suprachiasmaticus [8]. Our concept also explains mitochondrial dysfunction caused by permanently diminished Ca2+cyt causing de-energized mitochondria with subsequent cellular energetic depression or by largely and permanently increased Ca2+cyt causing over-energization also at night with the danger of enlarged ROS formation.