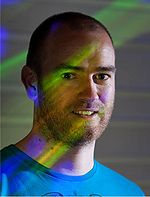 Increased expression of the mitochondrial oxidative phosphorylation (OXPHOS) system and elevated cellular O2 consumption were observed during myoblast differentiation and their fusion into myotubes [1,2]. These processes were inhibited by high concentrations of rotenone (Rot; 10 µM), a widely used inhibitor of OXPHOS Complex I (CI), suggesting that activity of this complex is required for myotube formation [3]. However, Rot can also display off-target effects on microtubules and Rho-GTPases [4,5]. In this study we aimed at determining whether Rot-induced inhibition of myotube formation is an on- or off-target effect.

Myoblasts were isolated from mouse extensor digitorum longus (EDL) muscle of wild-type (WT) and CI-deficient (NDUFS4-/-) mice and differentiated for three days. In parallel, WT myoblasts were differentiated in the presence of two CI inhibitors (Rot or piericidin A, PA) or in the presence of the CIII inhibitor antimycin A (Ama). For all inhibitors, the lowest concentration that fully inhibited myoblast O2 consumption (100 nM) was used. Cell cultures were then analyzed for myotube formation using immunocytochemistry.

Our results demonstrate that genetic CI deficiency (NDUFS4-/- myoblasts) as well as CI and CIII inhibition by PA and Ama do not affect myotube formation in vitro. In sharp contrast, Rot treatment significantly inhibited this process. Hydroethidine (HEt) oxidation was similarly increased in Rot- and PA-treated cells, suggesting that HEt-oxidizing reactive oxygen species (ROS) are not responsible for the differential effect on myotube formation. The inhibitory effects of Rot on myoblast fusion were partially reversed by Y27632, a specific inhibitor of the Rho-associated, coiled-coil containing protein kinase (ROCK). Isoform specific knockdown studies revealed that Rot action was mediated by ROCK2 but not by ROCK1 or RhoA.

We conclude that formation of primary myotubes by myoblast fusion in vitro does not require active mitochondrial ATP production and is inhibited by Rot via a ROCK2-dependent mechanism. This means that Rot is not an appropriate tool to study CI and/or OXPHOS dysfunction in murine myoblasts and myotubes.