Mammalian hearts are largely dependent on ATP production through oxidative phosphorylation, whereas glycolysis seems to be less important [1]. Additionally, 60-80% of cardiac metabolites for the citric acid cycle are provided by fatty acid oxidation [2]. These findings show, that mitochondrial function is crucial for proper heart function. The focus of this study is to scrutinize the role of the oxaloacetate decarboxylase FAHD1 in heart muscle cells. Previous publications in our lab discovered and described FAHD1 as the first oxaloacetate decarboxylase in eukaryotes [3]. FAHD1 controls a strategic step in eukaryotic cells as it monitors the energy balance of mitochondrial metabolism, namely the entry of metabolites from fatty acid oxidation and glycolysis for the citric acid cycle and the following energy production by ATP synthesis.

As the energy metabolism of mammalian heart cells is largely dependent on pyruvate and further acetyl-CoA, the specific role of FAHD1 in the metabolism of cardiac tissue is not yet fully understood. An in vitro model of mammalian heart muscle cells lacking FAHD1 could validate the findings that FAHD1 is involved in the balance of metabolites for the citric acid cycle. Therefore, FAHD1 knock-out mice and wild-type mice are used to establish a primary culture of cardiomyocytes following a state of art Langendorff-free method published by Ackers-Johnson et al [4]. The advantage of this method over the commonly used Langendorff method is the independency of the Langendorff apparatus and therefore a simplified handling during cell extraction. Nevertheless, a yield similar to the Langendorff method was achieved. Once the culture is established and optimized, the metabolic activity will be determined by Oxygraph measurements. Oxygen consumption rates (OCR) and fatty acid oxidation (FAO) will be detected by extracellular flux quantification. In addition, by changing the media composition (e.g. pyruvate, fatty acids, glucose), the impact of different metabolites on cellular energy metabolism will be studied. Since the effect of the supplement variation on FAHD1 knock-out cells is unclear, this issue will be addressed by the experiments. Mentioned experiments will complete the understanding and characterization of FAHD1 as a key-player in mitochondrial metabolism and reveal its role in energy homeostasis of cardiac tissue. 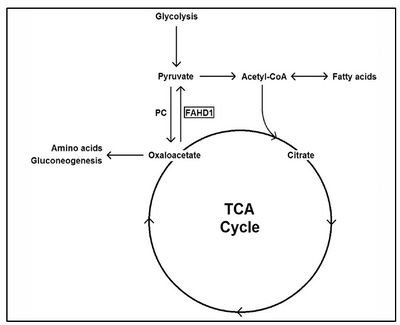 Figure 1: Role of FAHD1 in the citric acid cycle. The activity of FAHD1 leads to a decarboxylation of oxaloacetate to pyruvate. Therefore FAHD1 can be considered as an important regulator of the metabolic homeostasis in mitochondria [3].