Parkinson's disease (PD), a common neurodegenerative disease is characterized by the progressive loss of dopaminergic neurons in the substantia nigra. PD is an age related neurodegenerative disorder believed to originate in part via reactive oxygen species overproduction, leading to oxidative stress and mitochondrial dysfunction [1]. Paraquat (PQ2+), a widely used herbicide, is an oxidative stress inducer that has been implicated as a potential risk factor for the development of PD [2]. Scenedesmus sp. have been suggested for human nutraceutical application due to their content of the nutritious fatty acids and antioxidant pigments like astaxanthin, β-carotene, lutein and other vitamins. These pigments are naturally occurring polyphenolic compounds that display a variety of therapeutic properties in oxidative stress [3].

SCO treatment increased the viability of PQ2+ exposed SH-SY5Y cells and elevated cellular ATP levels in State 3. PQ2+ -induced elevation of basal and succinate-mediated ROS production and decrease of complex III activity was ameliorated by SCO. Succinate induced mitochondrial NADH increase was not challenged by PQ2+ but it was decreased by SCO suggesting inhibition of RET.

In conclusion, hydrophobic molecular species of Scenedesmus rubescens may exhibit neuroprotection against PQ2+-induced neurotoxicity and one of the potential explanantions is a bypass of mitochondrial electron flow that can be therapeutically beneficial in Parkinson's disease but also in vascular diseases affected by ischemia / reperfusion. 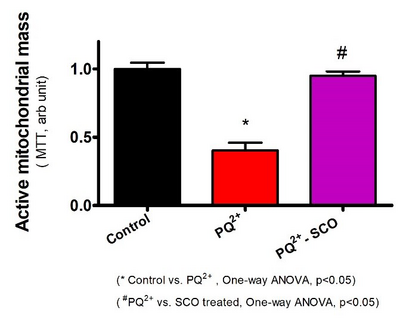 Figure 1: Effects of Scenedesmus rubens extract (SCO) on Paraquat induced cell death. Cells were treated with Paraquat (200 μM; 3 d) in the presence of SCO (12 μg/ml) and MTT index was measured by MTT assay in SH-SY5Y cells. Data are presented as mean ± SEM from four independent experiments *p<0.05 vs. control.