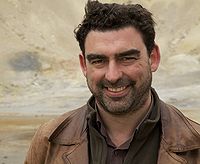 Living cells maintain low entropy through high enthalpy expenditure (ΔG = ΔH – TΔS). Prokaryotes turnover about 50-55 billion ATPs per division, 10-100 times cell mass. At the origin of life, energy demands must have been even higher, as early catalysts were necessarily less specific than evolutionarily refined enzymes. Yet this high energy requirement for the origin of life is frequently overlooked. Similarly, energy conservation as ion gradients across membranes is universal, yet the origin of membrane bioenergetics remains obscure. Alkaline hydrothermal vents suggest possible solutions to both problems, by providing sustained far-from-equilibrium conditions, in which hot alkaline fluids rich in H2 interface with acidic oceans saturated in CO2; as well as natural proton gradients across catalytic Fe(Ni)S mineral walls, giving an electrical potential of ~150-300 mV. This is remarkably similar in polarity and magnitude to the membrane potential of modern autotrophs. But harnessing geochemical proton gradients raises problems of its own: (i) how could natural proton gradients be harnessed in the absence of coupling proteins; and (ii) later, why and how would cells dependent on natural proton gradients begin pumping ions to generate their own gradient? The energy metabolism of anaerobes living in hydrothermal environments today – methanogens and acetogens – offers clues to the origin of membrane bioenergetics. Such cells use proton gradients to reduce the FeS protein ferredoxin (via the energy-converting hydrogenase, Ech), which in turn reduces CO2 to acetyl CoA. The pH-dependent reduction potential of ferredoxin and FeS minerals suggests that proton gradients could have driven primordial CO2 reduction in a similar way. Lowering the barrier to CO2 reduction could in principle drive accumulation of organics, leading to organic protocells occupying the micropores of alkaline vents. Such cells would benefit from tighter membrane coupling, as focusing of proton flux through membrane proteins such as Ech and ATP synthase would enhance ferredoxin reduction and ATP synthesis. However, the steadily decreasing permeability of organic membranes to small ions must have threatened a bioenergetic crisis, as proton flux is no longer neutralised by hydrothermal flux, necessitating active pumping. This crisis could have been averted by the evolution of a H+/Na+ antiporter, which transduces geochemical proton flux into a Na+ gradient, improving coupling, and potentially explaining the Na+/H+ promiscuity of ancient bioenergetic proteins. We propose that promiscuous H+/Na+ bioenergetics fuelled the transition to the first free-living cells, accounting for the ubiquity of chemiosmotic coupling and the deep divergence of bacteria and archaea [1].