4-hydroxy-2-oxoglutarate aldolase (HOGA) is a bi-functional mitochondrial enzyme, expressed predominantly in liver and kidney. HOGA is involved in the hydroxyproline degradation pathway (HOGglyoxylate+pyruvate), and mutations in HOGA result in primary Hyperoxaluria Type III, characterized by excessive oxalate production and kidney stone deposition [1]. We hypothesized that HOGA may also be involved in the TCA cycle as an oxaloacetate decarboxylase (oxaloacetatepyruvate; Fig. 1), which may allow the TCA cycle to turnover in the absence of pyruvate and/or excess oxaloacetate. The kinetics of HOGA with substrates HOG and oxaloacetate were investigated by measuring the K’m and kcat of recombinant human HOGA, using an LDH-coupled microplate assay. The role of HOGA in the TCA cycle was investigated using mitochondria, isolated from rat liver and kidney, where HOGA is highly expressed, and brain and heart, where expression is lower. ADP-stimulated malate respiration was measured relative to ADP-malate + pyruvate (M:PM), using oxygraphy (Oroboros Oxygraph-2k, note malate was used as oxaloacetate cannot cross the inner mitochondrial membrane).

While HOGA was 75% less efficient at cleaving oxaloacetate than its other substrate, HOG (K’m/kcat), the K’m for oxaloacetate was within range of that estimated for TCA intermediates (K’m,ox=129±8 µM, kcat,ox=0.52±0.01 s-1; K’m,HOG=55±5 µM, kcat,HOG=1.01±0.03 s-1). Overall, HOGA appears to use the same catalytic mechanism to cleave both HOG and oxaloacetate substrates. Interestingly, the TCA cycle intermediate a-ketoglutarate was found to be a competitive inhibitor of HOGA oxaloacetate decarboxylase activity (Ki=2.8 mM). Mitochondria from rat liver had the highest M:PM respiration relative to all other organs (0.46±0.05, P<0.05). Though kidney had a higher M:PM respiration than heart (0.27±0.02 vs 0.15±0.02, P<0.05 in kidney and heart, respectively), brain respired as well as kidney (0.33±0.04).

In summary, HOGA cleaves oxaloacetate and HOG using the same catalytic mechanism but was less efficient with oxaloacetate. Liver and kidney have high HOGA expression, and mitochondria from both respire significantly better on malate relative to PM than heart mitochondria. The brain respires just as well with malate compared to kidney, and this may be due to high expression of malic enzyme, which can convert malate directly to pyruvate (Fig. 1). Malate supported respiration in HOGA overexpressing cells will confirm the direct role of HOGA in the TCA cycle. 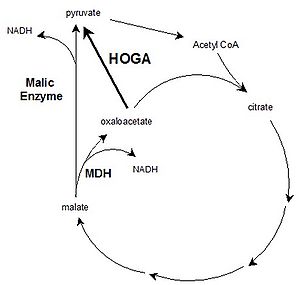