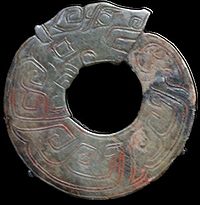 The universe was early divided into Earth below and Heaven above. These, two as one, gave the idea of opposites but forming a unity. Each opposite was assumed to be powerful and so was their final unity. For creation of the universe they projected reproduction to conceive creation. Now reproduction results in the union of two opposites as male and female. Correspondingly, the Chinese believed Light and Darkness, as the ideal opposites, when united, yielded creative energy. The two opposites were further conceived as matter and energy which became dual-natured but as one. The two opposites were yin-yang and their unity was called Chi. Yin-Yang was treated separately in Chinese cosmology which consisted of five cosmic elements. Since Chinese alchemy did reach Alexandria probably the symbol Yin-Yang, as dual-natured, responsible for creation, was transformed into a symbol called Ouroboros. It is a snake and as such a symbol of soul. Its head and anterior portion is red, being the colour of blood as soul; its tail and posterior half is dark, representing body. Ouroboros here is depicted white and black, as soul and body, the two as "one which is all." It is cosmic soul, the source of all creation. Ouroboros is normally depicted with its anterior half as black but it should be the reverse as shown here. With the name Chemeia taken to Kim-Iya, the last word would take Ouroboros to Yin-Yang. • Keywords: Ouroboros, Yin-Yang, Alchemy

This reference was brought to the attention of Bioblast by Dr. Vyacheslav Kalchenko, who also sent the picture of the Jade Ouroboros, Shang Dynasty, by Mountain at Shanghai Museum (above).

Retrieved from "https://wiki.oroboros.at/index.php?title=Mahdihassan_1989_Am_J_Chin_Med&oldid=222281"
Category:
This page was last edited on 23 November 2021, at 10:42.
This page has been accessed 7,025 times.
Privacy policy
About Bioblast
Disclaimers