Abstract: .. From the start of my scientific career the galvanic cell, the first form of which, the Volta pile, popularized physics in a single stroke and at the same time presented us with so many problems, appeared to me to merit especially further study. ..

It was particularly disillusioning to find a man like Helmholtz returning repeatedly throughout his scientific career to his first love, the galvanic cell, which he had courted in his great youthful work "Erhaltung der Kraft" (The conservation of energy), without however succeeding in finding a satisfactory solution.

As often in natural science the picture changed quite suddenly. New fruitful concepts appeared, through the interplay and extension of which most of the darkness has been to a large extent dispelled in a single stroke. Such means were Van ’t Hoff’s theory of osmotic pressure, Arrhenius’ theory of electrolytic dissociation, and finally many new approaches to the treatment of chemical equilibria, which, brilliantly presented, are to be found scattered throughout the first edition of Ostwald’s "Lehrbuch der Allgemeinen Chemie" (Textbook of general chemistry). So there arose in 1889 the osmotic theory of galvanic current generation, which has not been seriously challenged since it was put forward more than thirty years ago and has undergone no appreciable elaboration since its acceptance, surely a clear sign that it has so far satisfied scientific needs. ..

The osmotic theory of current generation stipulates moreover that when a metal ion concentration is higher than consistent with the solution tension of the particular metal, on immersion of the metal, ions of the relevant metal electrode must go into solution, while conversely they must settle on the electrode when the reverse is the case. 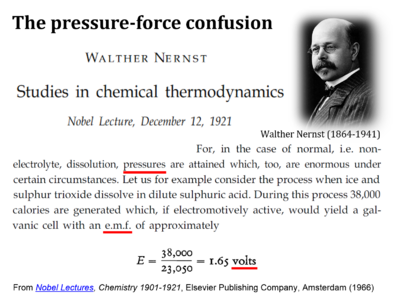 "For many decades the pressure-force confusion has blinded the most brilliant minds, reinforcing the expectation that Ohm’s linear flux-force law should apply to the hydrogen ion circuit and protonmotive force. .. Physicochemical principles explain the highly non-linear flux-force relation in the dependence of LEAK respiration on the pmF. The explanation is based on an extension of Fick’s law of diffusion and Einstein’s diffusion equation, representing protonmotive pressure ― isomorphic with mechanical pressure, hydrodynamic pressure, gas pressure, and osmotic pressure ― which collectively follow the generalized linear flux-pressure law."
Gnaiger E (2020) Mitochondrial pathways and respiratory control. An introduction to OXPHOS analysis. 5th ed. Bioenerg Commun 2020.2. doi:10.26124/bec:2020-0002
» pressure = force × free activity