From Bioblast
(Redirected from Permeabilized fibres)
Jump to: navigation, search

Unfortunately, the oxygen dependence of respiration in permeabilized fibers is about 100-fold higher compared to small living cells and isolated mitochondria (reviewed by Scandurra and Gnaiger 2010) due to artificial diffusion gradients resulting from the spatial constraints (long diffusion distances) in the fiber preparation (Gnaiger 2003, Pesta and Gnaiger 2012). When incubating pfi below air-level oxygen pressures at a physiological temperature of 37 °C, therefore, it must be shown that the preparation is not oxygen limited due to the spatial configuration of fiber bundles and development of a hypoxic core. Control experiments should be shown (rather than neglecting the problem of oxygen limitation) with traces of JO2 in the O2k over prolonged periods of time, when oxygen drops from air level to the minimum experimental values, which would provide proof that oxygen flux is stable and not progressively limited by the declining oxygen concentration. In pfi from various species and muscle types (including human, rat, mouse and fish heart; human, horse, rat, mouse, and fish skeletal muscle), oxygen limitation has been shown for pfi respiration below air level pO2. Undefined hypoxic limitation of respiration of a core population of mitochondria is not a satisfactory condition, hence hyperoxic incubation presents the best compromise for respiratory studies with pfi. Unfortunately, oxygen limitation of pfi has been ignored by several research groups (Kuznetsov et al 2008; compare Kuznetsov et al 1998; for a discussion see Pesta and Gnaiger 2012). 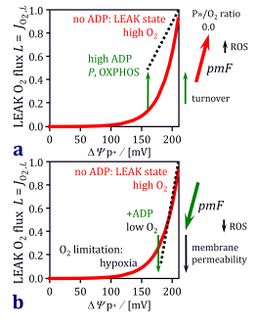 We have tested the oxygen dependence of H2O2 production in a preparation of cardiac mitochondria during the O2k-Fluorometry Workshop IOC66. For illustration and discussion, we used a classical simple substrate (succinate&rotenone or the non-physiological condition of succinate only), and showed quantitatively the pronounced oxygen dependence of H2O2 production in the high oxygen range when mitochondrial respiration is fully oxygen-saturated (Boveris 1977[1]). An illustration of the complex interactions of LEAK respiration, membrane potential, hyperoxia and hypoxia is given in the figure (modified from Gnaiger 2001; for the figure legend, click on the figure).

On the other hand, isolated mitochondria (imt) require too much tissue for most of our studies on biopsies and on mice. To address these problems, we initiated a project on an alternative approach, using a high-quality mt-preparation with a high mt-yield. To achieve this goal, we tested the O2k-Set for muscle tissue homogenate preparation, not using any proteases (such as nagarse) nor saponin or digitonin, with merely 15 seconds of mechanical treatment, and completing the entire preparation within 10 min. We optimized the tissue homogenate (thom) preparation to obtain a 100% yield of functionally intact mitochondria. Respiration of muscle thom is less oxygen dependent compared to pfi, but some extent of hyperoxia remains necessary compared to imt to avoid any oxygen limitation.

A summary of test experiments (basic respirometry only) and a description of the shredder homogenization procedure is available.

A demo experiment on respiration and hydrogen peroxide production of mouse heart homogenate with the [1] is shown in the workshop programme (download pdf file from IOC66).

After removal of the tissue from the species, the procedure allows mechanical separation of muscle tissue in a relaxing solution. Thereafter, muscle tissue is incubated in saponin by gentle agitation. Saponin, a chemical permeabilization agent of plant origin, selectively attacks cholesterol-rich (plasma) membranes of cells or muscle ﬁbers, leaving intracellular membrane structures (mitochondria and ER) as well as myoﬁlaments and the cytoskeleton intact. Consequently, the plasma membrane barrier integrity is lost and the cytosol and all solutes are washed out and the composition of the intracellular milieu is quickly equilibrated with the incubation medium. The mitochondria (in situ) are then able to use various substrates within a given protocol.

Plasma membrane permeabilization with digitonin or saponin yields effective wash-out of free cytosolic molecules including adenylates, substrates, and cytosolic enzymes, making externally added compounds accessible to the mitochondria. ADP kinetics is fundamentally different in pfi and imt (Saks et al 1988). In addition, oxygen kinetics is shifted by a 100-fold increase of the p50 in pfi versus imt (Pesta and Gnaiger 2012).

Addition of fibers to the O2k-chamber

What is the optimum ADP concentration to evaluate OXPHOS capacity in permeabilized muscle fibers?

» Pesta 2012 Methods Mol Biol: At a high apparent Km for ADP of 0.5 mM, flux at 2.5 and 5 mM ADP is ADP-limited by 13 % and 7 % (assuming L/P=0.2). 2.5 mM ADP is saturating in many cases, yet a further increase of ADP concentration provides a test for saturating [ADP]. This is particularly important for evaluation of OXPHOS versus ET capacity (P versus E or P/E coupling control ratio).

Small tissue samples (10 mg wet mass) should be put immediately into a pre-cooled storage medium, e.g. BIOPS, and stored on ice (0 to 4 °C). Isolated mitochondria should be stored at high concentration (50 mg mt-protein/mL) on ice in mitochondrial preservation medium.[2]

Up to 12 hours of cold storage does not normally affect the mitochondrial respiratory function of the liver (pig: 24 h)[3] and human muscle biopsies (skeletal muscle: 24 h[4]; cardiac muscle: 8-12 h[5]).

Muscle biopsies of horses can be stored for several days without loss of function[6]).

Storage time without loss of function is, therefore, tissue and species-dependent and should be evaluated experimentally. When a larger tissue sample is available, separate the sample into small (10 mg) pieces, and apply respirometric SUIT protocols on subsamples in a time course. In particular, evaluate dyscoupling (L/E and P/E coupling control ratios), cytochrome c release,[7] and OXPHOS capacities with various substrate combinations.