Photorespiration is the process by which the enzyme RuBisCo oxygenates ribulose biphosphate (RuBP) instead of carboxylating it as part of the Calvin-Benson cycle, creating phosphoglycolate, a product that cannot be used within this cycle, thus dissipating the energy in photosynthesis. It is estimated that approximately 25 % of RuBisCo reactions are photorespiration, meaning a potential 25 % reduction in photosynthetic output due to the carbon fixed by photorespiration being released as carbon dioxide and nitrogen as ammonia, while the other product, 3-phosphoglycerate (G3P), requires a higher metabolic cost. This process involves a complex network of enzymes and metabolite exchanges between the chloroplasts, peroxisomes and mitochondria. It is also known as the oxidative photosynthetic carbon cycle or C2 photosynthesis. Environmental conditions tend to affect it, such as temperature and partial pressure of oxygen and carbon dioxide. C4 plants, CAM plants and algae have biochemical and biophysical mechanisms to overcome the photosynthetic losses due to photorespiration making them more photosynthetically efficient than C3 plants. Recent plant biotechnology advances focuse on increasing plant photosynthetic carbon fixation by reducing photorespiration loses. 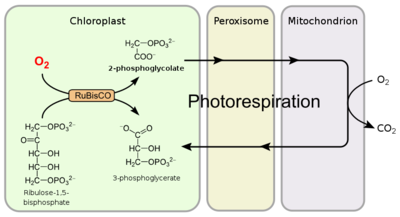