Singlet oxygen (1O2) is one of the most reactive of all reactive oxygen species (ROS), which is produced by chlorophyll during photosynthesis, and induces transcriptional changes in the nucleus, far from its reach. Here, using combined molecular, biochemical and physiological approaches, evidence is presented for how reactive carbonyl/electrophile species (RES) are involved in the acclimation of the model unicellular green alga Chlamydomonas reinhardtii to high light. Light stress led to an accumulation of RES, such as 2-propenal (acrolein) and 4-hydroxynonenal (HNE) [1,2], which are released when (1O2-derived lipid peroxides break down [3]. Treating cells with RES stimulated similar responses to high light, including higher tolerance to (1O2, similar patterns of protein carbonylation, and increased levels of glutathione [1,4], an important antioxidant involved in RES detoxification. A RNA seq. analysis revealed clear overlaps in gene regulation between RES-treated and high light-treated cells, which included an upregulation of many antioxidant enzymes and redox-related processes, as well as carotenoid and ubiquinone biosynthesis. However, most prominent was the overlap in down-regulated genes, whereby 70 % of the down-regulated genes under high light were also down-regulated by RES [1]. Moreover, the majority of these were shared when cells were treated with the photosenstizer Rose Bengal as an exogenous (1O2 source, confirming the specific role of (1O2 in RES signalling under high light stress. Finally, a comparison to differential gene expression in response to H2O2 revealed that half of the genes were also differentially expressed in the same direction after treatment with HNE, the only RES that increased upon treatment of cells with the same concentration of H2O2. Therefore, HNE is also a possible pathway for H2O2-mediated signalling. 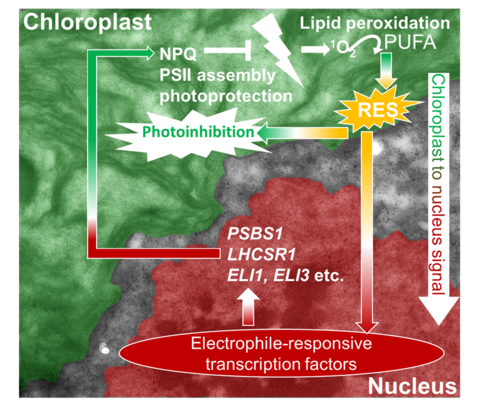 Retrieved from "https://wiki.oroboros.at/index.php?title=Roach_2022_Abstract_Bioblast&oldid=230722"
Category:
This page was last edited on 28 July 2022, at 07:30.
This page has been accessed 926 times.
Privacy policy
About Bioblast
Disclaimers