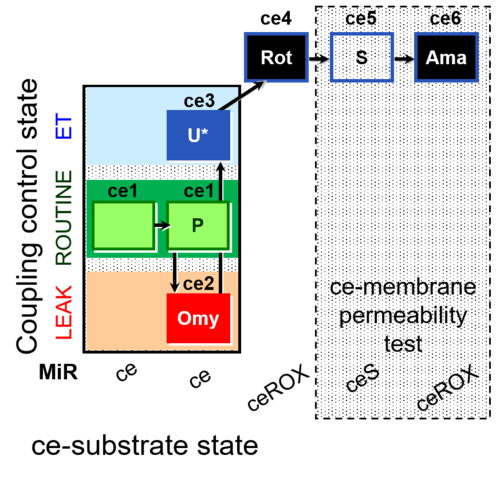 This protocol has been designed to study the H2O2 production in various coupling control states and test the cell membrane permeability with the same protocol using living cells. Pyruvate is added to support the ROUTINE respiration of living cells when they are in a respiratory for mitochondrial preparations (i.e. MiR05). To initiate LEAK-respiration oligomycin is added, inhibiting the ATP-synthase and leading to an increased in the H2O2 production. Whereas titrations of uncoupler results in a decreased H2O2 generation. However, one of the main problems with living cells is that the H2O2 flux is very low or hardly detectable due to the scavenger activity of the antioxidant enzymes in the cytosol.

According to our results, the H2O2 production is linearly dependent on the O2 concentration in MiR05-Kit, therefore, during the measurements the O2 concentration has to be well-defined. In this protocol, we suggest not to go under ~100 µM O2. SUIT-018 AmR mt D041 has been designed to study O2 dependence of H2O2 flux in mitochondrial preparations.

+ Reasonable duration of the experiments.
- Minor changes in the H2O2 flux can be seen with living cells because of the action of the antioxidant enzymes in the cytosol, which scavenge the H2O2 produced. (AmR is not permeable to the cell membrane, therefore, only the H2O2 that crosses the plasma membrane can be measured)