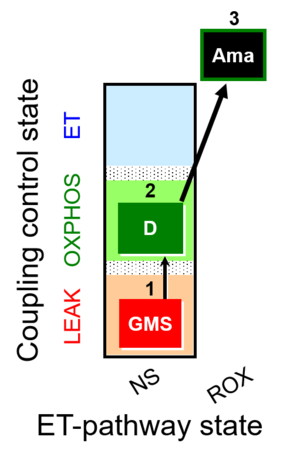 + Simple protocol to evaluate the oxygen dependence of H2O2 production in LEAK and OXPHOS states.
+ Combination of N- and S-pathways is physiologically more relevant than using simple substrate to support a specific mitochondrial pathway.
+ Option at the end of the protocol to study the effect of oxygen concentration in the ROX state (in the presence of Ama) both on the O2 and H2O2 fluxes.