[Mg2+]f determination from Magnesium Green (MgG) fluorescence in the extramitochondrial volume of isolated mitochondria and conversion to ADP-ATP exchange rate: Add mitochondria to 2 ml of an incubation medium of your choice. Including the adenylate kinase inhibitor Ap5A into the medium is essential; Mg2+, which is present in the assay medium, activates adenylate kinase. Ap5A is a potent inhibitor of adenylate kinase. MgG fluorescence can be recorded in a fluorometer, using 506 nm and 530 nm excitation and emission wavelengths, respectively. MgG exhibits an extremely high quantum yield (EM[MgG]=75,000 M-1*cm-1). At the end of each experiment, minimum fluorescence (Fmin) can be measured after addition of 4 mM EDTA, followed by the recording of maximum fluorescence (Fmax) elicited by addition of 20 mM MgCl2. Free Mg2+ concentration, [Mg2+]f, is calculated from the equation: [Mg2+]f = (Kd(F-Fmin)/(Fmax-F))-0.055 mM, assuming a Kd of 0.9 mM for the MgG-Mg2+ complex. The correction term -0.055 mM is empirical, and possibly reflects chelation of other ions by EDTA that have an affinity for MgG, and alter its fluorescence. This term is needed to obtain a reliable Mg2+ estimate, as determined from calibration experiments using solutions with known, stepwise increasing, Mg2+ concentrations. ADP-ATP exchange rate is estimated using the recently described method by our laboratory [1], exploiting the differential affinity of ADP and ATP to Mg2+. The rate of ATP appearing in the medium following addition of ADP to energized mitochondria (or vice versa in case of de-energized mitochondria), is calculated from the measured rate of change in free extramitochondrial [Mg2+]f using standard binding equations. The assay is designed such that the ANT is the sole mediator of changes in [Mg2+]f in the extramitochondrial volume, as a result of ADP-ATP exchange [1]. For the calculation of [ATP] or [ADP] from [Mg2+]f, the apparent Kd values should be estimated as described in [1].

Validation of the technique

In order be sure that the calibrated MgG signal is converted correctly to ADP-ATP exchange rate, the following 4 check-points should be sought:

» Manual by Christos Chinopoulos: "Follow the links appearing on the left, starting from the top. The 'core' of the method is outlined in the Buffers, chemicals, Kds determination of ADP, ATP to Mg2+, and Conversion of [Mg2+]free to [ATP]. However, it is advisable to go through all of the links, if you wish to understand what you will be actually doing."

used by OROBOROS for testing: stock: 2 mM in chamber: 2 µM

(To allow performance tests a substance mimicking light scattering of typical samples was added to the medium, however this is not relevant for the results presented here.)

The addition of a very small concentration of either EDTA or DTPA in the beginning of the experiment is suggested by the produced of the fluorophores (for all similar fluorophores) to remove traces of transition metal cations.

Shown in the DatLab graph is the original raw voltage as recoded by the fluorescence sensor and the Mg2+ concentration. For calibration determining KD and slope) and plotting the calculated Mg concentration (via the experimental scripting function of DatLab) the following relation was used 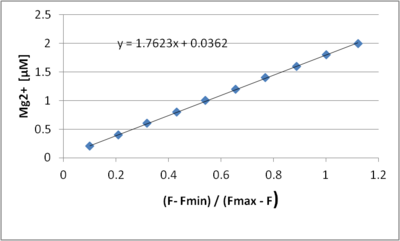 Magnesium green has been accessed more than