We fed 10-week-old APP/PS1 transgenic mice, and their littermate controls (wild-type, WT) either a normal chow diet, HFD, or HFD supplemented with a NO promoter (Na+-nitrite or L-citrulline) for six months. Specifically, 100 mg/L Na+-nitrite or 2.5 mM L-citrulline was provided in their drinking water. The mice were euthanized, and the hypothalami were carefully dissected out and placed in ice-cold BIOPS. The hypothalami were homogenized in a mitochondrial respiration media (MiR05-Kit, pH 7.1).

We used high-resolution respirometry (HRR, Oroboros O2k) coupled with a standardized substrate-uncoupler-inhibitor-titration (SUIT) protocol to measure respiration rates in duplicate during LEAK (State 4), OXPHOS capacity (State 3), and electron transfer capacity (ET) states in permeabilized hypothalami homogenates at 37 °C and O2 concentrations between ~450 µM and ~150 µM. We supplement the MiR05 with α-chaconine (40 µM) to chemically permeabilize the plasma membranes and synaptosomes. First, we measured NADH-linked LEAK respiration (NL) in the presence of pyruvate (5 mM), malate (2 mM), and glutamate (10 mM) in the absence of ADP. We measured NADH-Linked OXPHOS (NP) following the addition of a saturating concentration of ADP-Mg++ (5 mM). Next, we assessed the mitochondrial membrane integrity using cytochrome c (10 µM). We measured NS-linked OXPHOS (NSP) after the addition of succinate (10 mM). Next, we titrated in carbonyl cyanide m-chlorophenyl hydrazine (CCCP) (0.5 µM/step) to achieve NS-linked ET capacity (NSE). Next, we titrated rotenone (0.5 µM) to measure succinate-linked ET capacity (SE), followed by the titration of glycerol-3-phosphate (15 mM) to measure SGp-linked ET capacity (SGpE). Finally, we added antimycin A (2.5 µM) to measure residual oxygen consumption (Rox). The respiration rates were normalized per mg mass [pmol·s-1·mg-1], referred to as oxygen flux (JO2).

In summary, the APS/PS1 mice had lower OXPHOS and ET capacity than their WT controls while on an HFD. Physiologically relevant NO donors may provide an opportunity to mitigate some of the negative consequences of AD pathology. 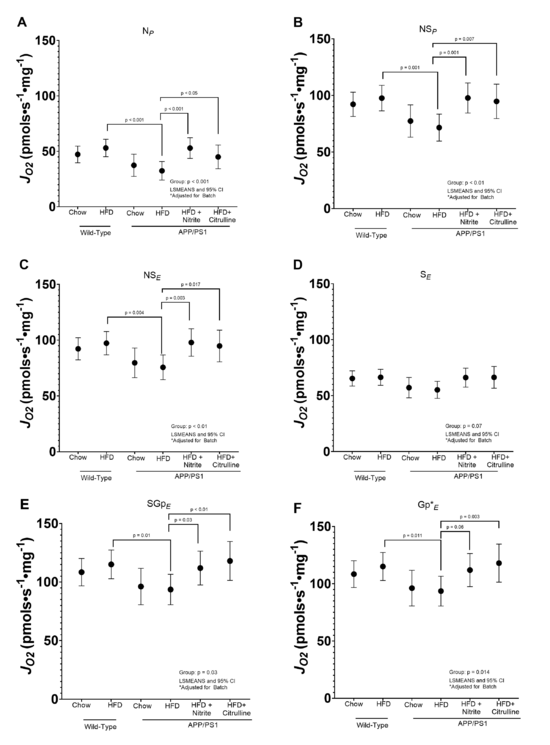 Retrieved from "https://wiki.oroboros.at/index.php?title=Irving_2022_Abstract_Bioblast&oldid=230750"
Category:
This page was last edited on 28 July 2022, at 07:41.
This page has been accessed 1,272 times.
Privacy policy
About Bioblast
Disclaimers