Amyotrophic lateral sclerosis (ALS) is a fatal neurodegenerative disease which affects motor neurons (MNs). Many familial and sporadic forms correlate with mutations in the gene encoding the antioxidant enzyme Cu/Zn Superoxide Dismutase (SOD1). Among mutants, the dismutase-active SOD1 G93A forms toxic aggregates on the cytosolic surface of outer mitochondrial membrane (OMM), using the Voltage-Dependent Anion Channel 1 (VDAC1) as binding site [1]. VDAC1 is the most abundant OMM pore-forming protein and allows the trafficking of metabolites (pyruvate, malate), ions, NAD+/NADH and ATP/ADP across the membrane; furthermore, it serves as an anchor for many cytosolic proteins, mostly for Hexokinases (HKs) [2]. However, in ALS MNs, the mitochondrial accumulation of SOD1 G93A impairs molecules exchange through VDAC1 and displaces HKs from mitochondria, promoting the organelle dysfunction and cell death [1-2].

By a means of in vitro and in cellulo approaches, we previously demonstrated that HK1 and SOD1 G93A compete for the same mitochondrial binding site, VDAC1 [3]. Based on these observations, we developed a small synthetic peptide corresponding to the first 11 amino acid residues of the HK1 N-terminal domain (NHK1) [3]. NHK1 is able to modulates VDAC1 activity when it is reconstituted in artificial membranes; when added to ALS MNs, the peptide promotes a complete recovery of the cell viability in a dose-response manner [3-4]. By using High-Resolution Respirometry (HRR), we then analyzed the mitochondrial respiration profile of MN-like cells NSC34 stably expressing SOD1 G93A. Our results indicate that NHK1 promotes a partial increase of oxygen consumption corresponding to ROUTINE and OXPHOS state. As demonstrated by FCRs analysis, the peptide stimulates a significative decrease of the LEAK respiration while increases net respiration and coupling efficiency linked to OXPHOS state [4]. This effect is probably due to the reduction of ~70 % of VDAC1-SOD1 G93A aggregates observed in the mitochondrial fraction of cells treated with NHK1 [4].

In conclusion, our results suggest that NHK1 drives the recovery of compromised mitochondrial respiration typical of ALS and provide new insights into the development of therapeutic molecules to fight the disease. Overall, our work helps to better understand the relationship between altered mitochondrial metabolism and MNs death. 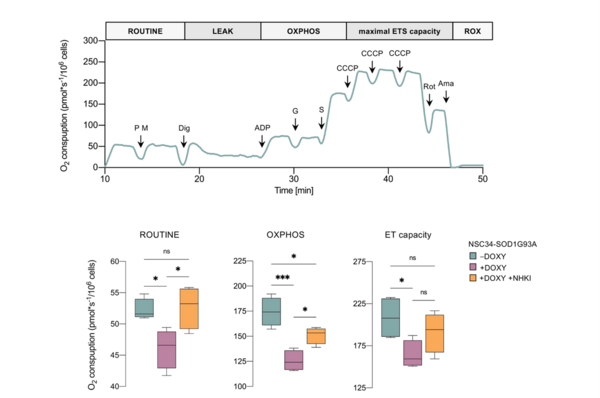 Retrieved from "https://wiki.oroboros.at/index.php?title=Magri_2022_Abstract_Bioblast&oldid=230759"
Category:
This page was last edited on 28 July 2022, at 07:44.
This page has been accessed 1,532 times.
Privacy policy
About Bioblast
Disclaimers