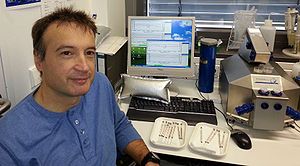 Even in higher species sulfide is quickly metabolised and thus degraded by an ancient metabolic pathway linked to the mitochondrial respiratory chain [1]. Since this metabolic process is strictly aerobic, the efficiency of sulfide metabolism is expected to decrease at low oxygen. This mechanism may explain how sulfide acts as an oxygen sensor within cells [2]. Therefore, in a series of preliminary experiments we quantified the sulfide metabolism in a stable cell line derived from alveolar macrophages (AMJ2-C11), which previously proved to efficiently metabolise sulfide under aerobic conditions [3], at O2 partial pressures approaching hypoxia from 0.8 kPa down to 0.4 and 0.1 kPa.

Methods: All measurements were conducted using an Oxygraph-2k together with a TIP2k® titration pump (Oroboros Instruments, Austria). For each O2-partial pressure we performed 6 – 8 separate experiments. Before performing the experiments we recorded several transitions to anoxia in order to quantify the un-inhibited respiratory capacity close to anoxia [4] under the O2-partial pressures of 0.1, 0.4, and 0.8 KPa respectively. The inhibition of mitochondrial respiration was quantified in terms of the total amount of sulfide required to reduce the routine oxygen flux (JO2) to 50% by means of a continuous sulfide injection at a rate of 10 nM/s. A second titration pump was used to simultaneously maintain the oxygen concentration rate at the predefined level adopting a previously described technique [5].

Discussion: These results confirm a much less efficient degradation of sulfide at the lower oxygen level suggesting potential interactions between sulfide and cell metabolism when approaching the anoxic condition. In theory, sulfide concentration should increase and thus potentially inhibit mitochondrial respiration at low oxygen, provided that the production rate is sufficiently high and remains constant under these conditions, and that the excess sulfide is not chemically bound by proteins (sulfhydration). On the other hand, the inhibition of mitochondrial respiration should in turn decrease the oxygen consumption of the cell, thus potentially decelerating or even impeding a further decrease of the oxygen concentration. So far, however, whether and how sulfide interacts with metabolism at low oxygen remains the subject of future investigations. 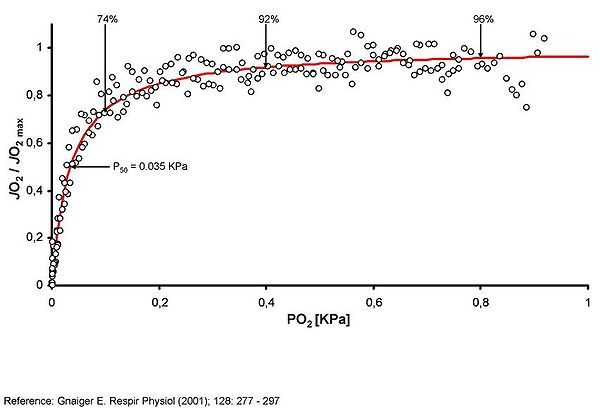 The figure shows original data on JO2/JO2max from two representative anoxic transition experiments conducted with AMJ2-C11 cells (open dots). As indicated by the vertical arrows, the sulfide titrations have been performed under O2-partial pressures of 0.1, 0.4, and 0.8 kPa, corresponding to a JO2 of 74%, 92%, and 96% of JO2max respectively. 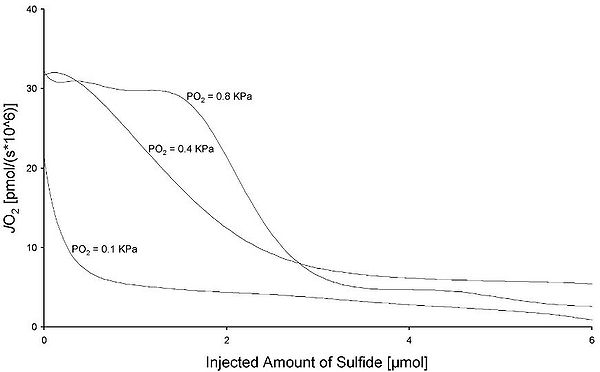 The figure plots the injected amount of sulfide against the JO2 at all three partial pressures.