An adequate oxygen supply is crucial for vertebrate survival because ATP is almost exclusively produced by mitochondria though oxidative phosphorlyaltion (OXPHOS). Anoxia leads to ATP depletion and altered metabolic pathways including succinate accumulation which during re-oxygenation triggers a reverse of electron flow to CI accompanied by an enhanced deleterious reactive oxygen species (ROS) production [1]. A few species are able to survive prolonged periods of hypoxia and anoxia at tropical temperatures [2,3]. Two closely related elasmobranchs have very different adative responses to anoxia [2] while both can survive prolonged periods of anoxia the epaulette shark enters a phase of metabolic depression in response to hypoxia or anoxia while the grey carpet shark maintains its metabolic rate but releases additional red blood cells to prolong survival. Mitochondria in heart fibers from the anoxia tolerant epaulette shark maintained mitochondrial efficiency with a low ROS release in response to oxygen limitation, including anoxia [4]. The extent of mitochondrial plasticity in response to diminished oxygen (hypoxia or anoxia) and the triggers involved in this adative process are currently being investigated in our laboratories.

Our aim was to determine the response of mitochondrial complexes to elevated succinate after a bout of diminished oxygen in two closely related anoxia tolerant species. Sharks were acclimated in aerated sea-water (100L tanks) held at 22°C and were not fed 24 hours prior to sampling. Sharks were euthanised, the cerebellum isolated and homogenised in cold MiR05. Mitochondrial respiration was measured using high resolution respirometry (Oroboros Oxygraph-2k) with a SUIT protocol. Respiration flux (pmol O2 s-1 mg-1) was determined using DatLab 6.0 and statistical analysis were performed using SPSS™. Calculations were made to determine CI capacity, CII activation and coupling efficiency with and without a 20 min episode of anoxia followed by reoxygenation and stepwise succinate titrations (using a TIP2K microPump).

CI OXPHOS was examined under i) normoxia; ii) hypoxia (PO2 = 1%); and iii) after 20 min of anoxia (followed by reoxygenation). Respiration rates were normalised to the respective normoxic CI OXPHOS for each species in order to estimate the potential loss of CI capacity. Exposure to hypoxia or anoxia/reoxygenation induced a decrease of CI capacity in both species. Post-anoxia, the CI capacity of mitochondria from the grey carpet shark was significantly less than those of the epaulette shark. Furthermore, the coupling efficiency of mitochondria from the epaulette shark increased significantly after anoxia/reoxygenation compared to those from the grey carpet shark. After 20 min of anoxia followed by 5 minutes of reoxgyenation, the CII substrate succinate was titrated from physiological concentrations (0-2 mM) until OXPHOSmax was reached. Succinate-stimulated mitochondrial respiration was normalised to the ET-pathway max measured for each species. Analysis revealed that succinate stimulated CII respiration following 20 min of anoxia compared to CII respiration in normoxia (controls) was significantly lower in the epaulette shark, reaching a 60% decrease in CII respiration at low levels of succinate (0.5 mM). In contrast, in the grey carpet shark the succinate stimulated CII respiration following 20 min of anoxia compared was significantly higher than the CII respiration in their controls, reaching a 40% increase at 2.5 mM.

Taken together these data indicate that the ES but not the GCS was able to maintain coupling efficiency and CI capacity even after 20 mins of anoxia followed by reperfusion. The ES but not the GCS responded to succinate accumulation by significantly decreasing CII respiration. Moreover these data suggest that the adaptive plasticity of ES mitochondria would support entry into metabolic depression as a protective response to anoxia/reoxygenation. 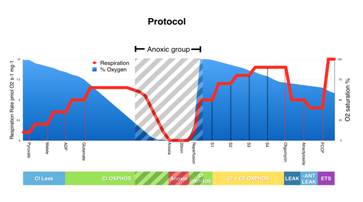