Aerobic exercise and several aspects of life style influence mitochondrial respiratory function in human muscle, in addition to effects of age, gender and genetic background. In the present study, a significant part of the variability in respiration of human mitochondria [1] was explained by analysis of readily accessible background information on 25 healthy human subjects (19 males and 6 females; 22 to 46 years). Based on a novel multi-substrate/inhibitor protocol, this approach advances the functional analysis in mitochondrial physiology and pathology.

A protocol for high-resolution respirometry (with two or three Oroboros Oxygraph-2k operated in parallel) was designed for quantification of mitochondrial respiratory capacities in permeabilized muscle fibers obtained from small needle biopsies (2 to 6 mg per run; 2 or 4 runs per subject). Cell membranes were selectively permeabilized [2], and lack of respiratory stimulation by cytochrome c indicated an intact outer mitochondrial membrane (Fig. 1). Measurements were performed at 30 °C in the range of 20 to 50 kPa oxygen pressure (210 to 530 µM), to avoid oxygen limitation [3]. In this range, autoxidation of ascorbate and TMPD was a linear function of oxygen, which was applied for correction of chemical background oxygen flux.

ADP-stimulated respiration with malate+octanoylcarnitine (state OM3) was 46 % compared to further addition of glutamate (state GM3). An additive effect was exerted by parallel complex I+II electron input (the GS3/GM3 ratio was 1.6), since respiration with succinate/rotenone (S3) was only 1.1 times the state GM3 (Fig. 1). In a variation of this protocol, FCCP was titrated upon state GS3, yielding a further 44 % increase (and a corresponding GSu/GM3 ratio of 2.4). State GS3, therefore, reflects the capacity of the phosphorylation system, in agreement with results on isolated mitochondria [4]. The coupled state GS3 represents the physiologically relevant upper limit of respiration, providing parallel complex I and II input in accordance with an operational TCA cycle. The physiological excess capactiy of COX, expressed as the COX/GM3 ratio was 2.7, whereas the COX/GS3 ratio was 1.4. Respiratory adenylate control ratios were identical with octanoylcarnitie (OM3/OM2) and succinate (S3/S4o).

State GS3 declined significantly as a function of body mass index (BMI; body weight/hight2) in the 19 males, which explained ~60 % of total variability. BMI was independent of age, as was the GS3 respiratory capacity. Fatty acid oxidation capacity (state OM3), however, declined significantly with age (males and females combined), thus extending a study on isolated mitochondria [1] to a surprisingly narrow range of ages. Consideration of BMI and age, therefore, improves the diagnostic resolution of functional mitochondrial respiratory analyses. 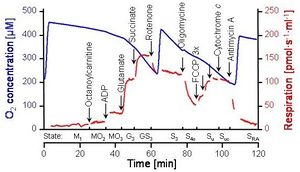 Figure 1. Oxygen concentration and oxygen flux per volume (respiration) of permeabilized fibers (vastus lateralis, 5.0 mg wet weight) in medium MiR05 containing malate. The titration steps are shown by arrows (continued with titrations of ascorbate and TMPD; not shown), and the corresponding states are defined on the time axis. Oxygenations were performed with pure oxygen purged into the gas phase of the intermittently opened chamber.