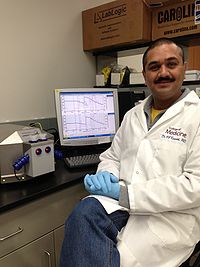 Metabolic complications resulting in cardiomyopathy are associated with long-term treatment of nucleoside reverse transcriptase inhibitors (NRTIs) [1]. While mitochondrial toxicity is thought to be a major underlying cause, the molecular mechanism(s) are still ambiguous. Substantial amount of work in the area of NRTI toxicity has clearly indicated the loss of quality and the function of mitochondria as a result of long-term NRTI exposure [2]. Oxidative phosphorylation as an endpoint of toxicity measurements in these studies has not been adequately addressed. Oxidative phosphorylation is an important component of cellular bioenergetics, which is explored comprehensively to resolve the mechanisms of energy transduction in the mitochondrial electron transport system (ET-pathway) and examine different modes of mitochondrial respiratory control. In mitochondrial pathophysiology, maximal mitochondrial respiration in the coupled state is measured for quantitative determination of OXPHOS. In the current investigation our area of interest is in identifying mitochondrial toxicity targets i.e. OXPHOS, ET-pathway and mechanisms leading to cardiac toxicity. The adult male and female rats were chronically exposed to a commonly used NRTI in HIV treatment, by providing Azidothymidine (AZT) in the drinking water for six months. At the end of the study, rats were subjected to an echocardiogram. Mild changes were observed in the ECHO data suggesting impaired cardiac function in AZT treated rats. The respiratory control rates and electron transport chain capacity of mitochondria isolated from these rat hearts were studied polarographically using a high resolution respirometer. Although there were marginal differences observed among control rats and AZT treated rat mitochondrial OXPHOS, no level of significant difference was established. The glitches faced in determining the OXPHOS using isolated rat heart mitochondria will be presented and some of the interesting findings which were observed will also be discussed. Taken together, the data suggest that cardiac toxicity in a chronic treatment regimen of male and female rats involving AZT may not be associated with mitochondrial toxicity involving OXPHOS mechanism.