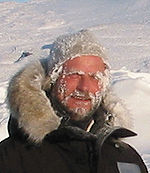 10 years ago the uncoupling hypothesis was presented for mitochondrial haplogroups of arctic populations suggesting that lower coupling of mitochondrial respiration to ATP production was selected for in favor of higher heat dissipation as an adaptation to cold climates [1,2]. Up to date no actual tests have been published to compare mitochondrial coupling in tissues obtained from human populations with regional mtDNA variations. Analysis of oxidative phosphorylation (OXPHOS) is a major component of mitochondrial phenotyping [3]. We studied mitochondrial coupling in small biopsies of arm and leg muscle of Inuit of the Thule and Dorset haplogroups in northern Greenland compared to Danes from western Europe haplogroups. Inuit had a higher capacity to oxidize fat substrate in leg and arm muscle, yet mitochondrial respiration compensating for proton leak was proportionate with OXPHOS capacity. Biochemical coupling efficiency was preserved across variations in muscle fiber type and uncoupling protein-3 content. After 42 days of skiing on the sea ice in northern Greenland, Danes demonstrated adaptive substrate control through an increase in fatty acid oxidation approaching the level of the Inuit, yet coupling control of oxidative phosphorylation was conserved. Our findings reveal that coupled ATP production is of primary evolutionary significance for muscle tissue independent of adaptations to the cold.

Our functional test of the uncoupling hypothesis was based on a substrate-uncoupler-inhibitor titration (SUIT) protocol using high-resolution respirometry designed to interrogate coupling control in different substrate states (ETF-linked octanoylcarnitine+malate and CII-linked succinate) and compare OXPHOS capacities for ETF-, CI-, CI+II and CII-linked substrate states [3,4]. Various coupling-control ratios can be derived from such experiments (respiratory acceptor control ratio, RCR=P/L; which is the inverse of the OXPHOS control ratio, L/P) which are related to but do not directly express biochemical coupling efficiency [3]. A general concept of normalization of mt-respiration is presented here, which provides a consistent expression of biochemical coupling efficiency, ΔjE-L, ranging from 0.0 at zero coupling to 1.0 at the limit of a completely coupled system.

Flux control ratios, j, are oxygen fluxes normalized relative to a common respiratory reference state [2]. For a given protocol or set of respiratory protocols, flux control ratios provide a fingerprint of coupling and substrate control independent of (i) mt-content of cells or tissues, (ii) purification in preparations of isolated mitochondria, and (iii) assay conditions for determination of tissue mass or mt-markers external to a respiratory protocol (CS, protein, stereology, etc.). Complementary to the concept of flux control ratios and analogous to elasticities of metabolic control analysis [3], Flux control factors express the control of respiration by a specific metabolic variable, X, as a dimensionless (normalized) fractional change of flux, Δj. Z is the reference state with high (stimulated or un-inhibited) flux; Y is the background state at low flux, upon which X acts (jY=Y/Z); X is either added (stimulation, activation) or removed (reversal of inhibition) to yield a flux Z from background Y. Note that X, Y and Z denote both, the metabolic control variable (X) or respiratory state (Y, Z) and the corresponding respiratory flux, X=Z-Y. Experimentally, inhibitors are added rather than removed; then Z is the reference state and Y the background state in the presence of the inhibitor. The flux control factor of X upon background Y is expressed as the change of flux from Y to Z, normalized for the reference state Z:

Substrate control factors express the relative change of oxygen flux in response to a transition of substrate availability in a defined coupling state. Coupling and phosphorylation control factors are determined in an ET-pathway competent substrate state.

With ETF-linked or CII-linked substrates, ET-capacity (E) was not in excess of phosphorylation system capacity, such that P=E or P/E=1.0. In this case, the biochemical coupling efficiency is simply related to the respiratory acceptor control ratio, ΔjE-L = (RCR-1)/RCR = (P-L)/P. In the present example, LEAK respiration is the background state (Y=L) and P=E is the reference state (Z).

Biochemical coupling efficiencies measured with ETF-linked and CII-linked substrates were identical in Inuit and Europeans, arm and leg, and before and after the 42 days adaptation to life in the cold.

We thank the volunteers who participated in the study. This work was sponsored by Crown Prince Frederick and supported by the John and Birthe Meyer Foundation, the Danish National Research Foundation (504-14), Fonds de le Recherche en Sante Quebec (FRSQ), and The Natural Science and Engineering Research Council of Canada (NSERC). Support was provided from the Hunter Society in Qaanaaq and Hans Jensen at Hotel Qaanaaq. The Danish and American staff at the Thule Base and the staff at the hospital in Qaanaaq and at Thule Base kindly provided technical support. Jaya Rosenmeier also provided medical support. EG was supported by K-Regio project MitoCom Tyrol.