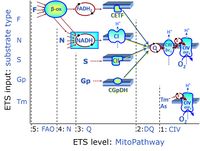 Abstract: The complexity of SUIT protocols is primarily determined by the large number of Electron transfer-pathway states and fuel substrates involved, compared to only three well defined coupling-control states. Whereas the SUIT protocol names specify all sequential steps in a SUIT protocol, the categories of SUIT protocols reduce this diversity to a list of substrate types involved. 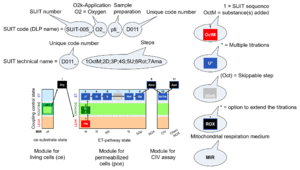 Towards a library of SUIT protocols

At the present stage of development of the Library of SUIT protocols as part of the MitoFit Quality Control System, the substrate types linked to five ET-pathway types are considered. 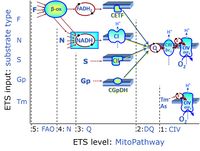 Addition of malate alone (M without P or G) is not considered as substrate type N. However, high mt-malic enzyme activity requires a change of this concept, when M alone represents an ET-pathway ccompetent substrate state. Low concentration of M may be used to support FAO, whereas a higher concentration of M may be required for N-junction respiratory capacity to override FAO capacity; this needs corresponding kinetic analyses (SUIT test protocols).