A healthy reference population, HRP, establishes the baseline for the relation between body mass and height in healthy people of zero underweight or overweight, providing a reference for evaluation of deviations towards underweight or overweight and obesity. The WHO Child Growth Standards (WHO-CGS) on height and body mass refer to healthy girls and boys from Brazil, Ghana, India, Norway, Oman and the USA. The Committee on Biological Handbooks compiled data on height and body mass of healthy males from infancy to old age (USA), published before emergence of the fast-food and soft-drink epidemic. Four allometric phases are distinguished with distinct allometric exponents. At heights above 1.26 m/x the allometric exponent is 2.9, equal in women and men, and significantly different from the exponent of 2.0 implicated in the body mass index, BMI [kg/m2].

Anthropometric studies carried out on adults since the 1960ies are prone to reflect the impact of high-caloric nutrition on allometric relationships, referring us to earlier time points for a HRP. The original studies in the CBH 1962 dataset (N=17523; Zucker 1962) were published between 1931 and 1944 and thus apply to a population (USA) before emergence of the fast-food and soft drink epidemic, and with a lifestyle demanding a balanced physical activity without the impact of local war or economic disaster on starvation. The CBH dataset includes men only, but it is emphasized that "evidence indicates that curves for females (not represented) are identical in slope and position with those of males".

The Committee on Biological Handbooks (1962) distinguishes three allometric phases from newborns to adults, with breaks of standing heights at 0.74 and 1.21 m/x (10 and 22 kg/x; Fig. 1; Fig. 2a and 2b). The corresponding allometric power functions are:

Figure 1: Allometric relation between height, H [m∙x-1], and body mass, M° [kg∙x-1], in the healthy reference population (HRP) from infancy to old age. The double-logarithmic plot is from the Committee on Biological Handbooks data set, summarizing five large groups of measurements (CBH 1962; Zimmer 1962). In the CBH 1962 data set three allometric phases are separated with breaks at standing heights of 0.74 and 1.2 m/x corresponding to 10 and 22 kg/x. The WHO Child Growth Standards (WHO-CGS) agree with the CBH 1962 data set within 2 % at H>1.26 m/x. Below 1.3 m/x the WHO-CGS body mass for girls and boys are lower than the CBH data, separated into allometric phases with breaks indicated by dotted lines at 1.26, 1.02 and 0.62 m/x. A trend towards overweight is indicated as a gain in body-mass at constant height (red arrows). The red circled cross indicates ‘Reference Man’ (Sender et al 2016). The allometric exponents, A, are given in the form of Eq. 1.

The parameters in Eq. 1 and Eq. 2 are related as

The WHO Child Growth Standards are based on large samples with similar numbers of girls and boys in longitudinal (N=1737 children) and cross-sectional studies (N=6669). The studies were conducted between 1997 and 2003 (WHO 2006 Acta Paediatr; WHO 2006 Geneva: World Health Organization; De Onis 2007 Bull World Health Organization). The WHO-CGS on height and body mass of children and adolescents is based on a particularly quality-controlled selection of healthy populations (De Onis 2007 Bull World Health Organization). "The WHO Child Growth Standards depict normal growth under optimal environmental conditions and can be used to assess children everywhere, regardless of ethnicity, socio-economic status and type of feeding" (WHO 2006 Acta Paediatr).

The WHO-CGS data set is characterized by three allometric phases in childhood to early adolescence (up to height 1.26 m/x), and a final phase which agrees closely with the CBH 1962 data set (Fig. 2).

Figure 2: Body mass as a function of height up to 1.4 m/x in the data sets of the Committee on Biological Handbooks (CBH 1962; based on publications between 1931 and 1944) and WHO Child Growth Standards (WHO-CGS; based on surveys between 1997 and 2003). a: Girls and boys of the WHO-CGS data set agree closely with the boys from the CBH data set, but show a trend towards lower body mass for height, despite of the later date of the surveys. b: The data of girls and boys are averaged at any given height and fitted by a power function which reveals four phases with breaks at 0.62 m/x (17.0 kg/x), 1.02 m/x (15.6 kg/x), and 1.26 m/x (24.6 kg/x). c: The relative deviation of the body mass, M, from the fitted line, M°, is the body mass excess, BME = (M-M°)/M°. The full lines show the deviation from the fitted line for girls and boys, and the dashed line shows the deviation of the average for girls and boys.

The WHO-CGS data suggest a lower reference body mass for height in the range of 0.7 to 1.1 m/x of children compared to the CBH 1962 data set (USA 1931-1944), even though the WGH-CGS surveys were carried out later (1997-2003), when the general trend towards overweight was already in full swing in the USA (NCD-RisC 2017 Lancet). This reflects the fact that the general trend of the average population towards overweight differs from a population selected as a healthy standard. The negative deviation of the CBH 1962 data set up to 0.7 m/x (Fig. 2c) illustrates 'how children should grow when not only free of disease but also when reared following healthy practices such as breastfeeding and a nonsmoking environment' (WHO 2006 Acta Paediatr). 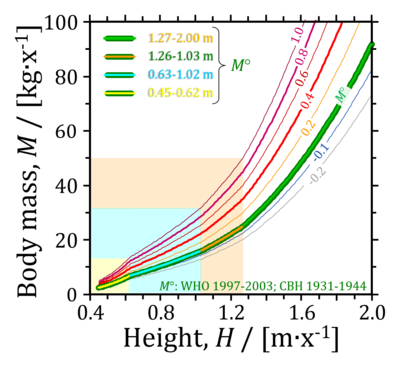 At any given height, the personal body mass may deviate from the reference body mass, M°, in the HRP for the same height. This difference is the excess body mass, ME = M-M°. When normalized for M°, we obtain the simple definition of the body mass excess, BME = ME/M°. By this definition, the BME equals zero in the HRP at all heights. For comparison, it is instructive to calculate the BMI as a function of height in the HRP, defining this as the BMI° or precision-BMI at BME=0. The normal BMI of 20 kg·m-2 is obtained in the HRP at H=1.7 m/x and M°=57.7 kg/x. If this normal BMI would represent a general index independent of height, it should be constant for the HRP, which is clearly not the case, neither for adults nor children (Fig. 4). 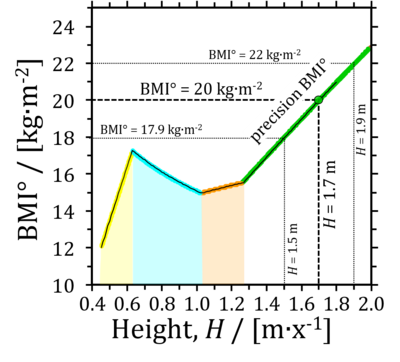 The concept of body mass excess, BME, is simple and easy to communicate to the general public. In contrast, neither the BMI nor the concept of a precision-BMI can be explained easily. With the BMI firmly established by convention in the WHO, however, it is important to harmonize the concepts of BME and BMI. Fig. 4 provides the first step for harmonization by assigning to the height of 'reference man' (Sender 2016 PLOS Biol) the BMI of 20 kg·m-2 as BMI°. BME cutoff points for overweight and obese are then obtained for BMI cutoffs of 25 and 30 kg·m-2 at heights of 1.79 and 1.85 m/x, respectively. 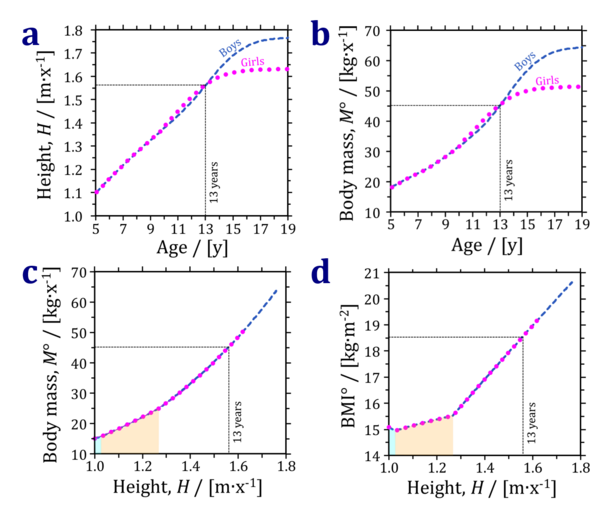 Figure 5: Growth curves and allometry of body mass and height in girls and boys from 5 to 19 years (WHO 2006). (a) and (b): Height and body mass as a function of age. The curves are very similar up to 13 years. (c) and (d) Body mass and precision-body mass index, BMI°, as a function of height. Three allometric phases are indicated by the shaded areas. The BMI does not yield an index that is independent of height.

Fig. 5 is based on the WHO Child Growth Standards (De Onis 2007 Bull World Health Organization). It illustrates the limitation of the BMI as an index of overweight and obesity. The precision body mass index, BMI°, is claculated for the healthy reference population (HRP), in which neither underweight nor overweight prevails and which, therefore, should be characterized by a constant index. This is achieved by the body mass excess, BME, which relates the actual body mass, M, to the reference body mass, M°, at a given height, BME=(M-M°)/M°. The BME is constant at 0.0 for the HRP for both sexes independent of height. In contrast, the increase of the precision BMI° from 15 to 21 kg·m-2 from 1.0 to 1.8 m/x represents a confounding factor which explains the necessity of adjusting the BMI cutoff points. Instead of a focus on adjusted BMI cutoff points (De Onis 2019 Public Health Nutrition), overweight and obesity should assessed in terms of the BME and BME cutoff points.