A single pilot experiment was carried out during an O2k workshop on high-resolution respirometry (IOC22). Respiration of isolated rat liver mitochondria was inhibited by addition of NO, which increased the sensitivity to oxygen >25-fold when compared to the half-saturation oxygen pressure, p50, in the absence of NO. Oxygen kinetics followed a monophasic hyperbolic function up to 2.2 kPa with NO (p50=0.93 kPa), compared to the standard oxygen range to 1.1 kPa without NO (p50=0.035 kPa). 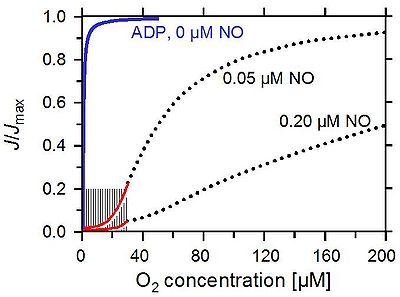 Figure 1. Oxygen dependence of mt-respiration and competitive inhibition by NO. The full line shows oxygen kinetics at state 3 with pyruvate and malate in the absence of NO, measured in the physiological oxygen range (from Gnaiger et al. 1998a). Dotted lines show inhibition of respiration by the indicated NO concentrations, where measurements were performed with low-resoltion respirometry and are restricted to the high oxygen range (from Koivisto et al. 1977). Extrapolations into the physiological oxygen range (shaded region) suggest sigmoidal oxygen kinetics, which requires testing by direct measurements at low oxygen (modified after Gnaiger, Kuznetsov 2002).