O2 slope in the closed and open O2k-Chamber

In an open chamber of the O2k the liquid phase in the chamber (aqueous medium) is in equilibrium with the atmosphere. All oxygen consumed by the polarographic oxygen sensor (POS) is immediately replaced from the atmosphere. The oxygen signal therefore has to be constant and the (negative) time derivative of the oxygen signal, called "O2 slope uncorr." in DatLab, has to be zero. The background corrected oxygen flux is meaningless for the open chamber situation. This is because the background correction at air saturation subtracts the consumption of oxygen by the sensor from the negative slope, when diffusion into and out of the chamber is zero at air saturation. Therefore, the background-corrected oxygen flux in the open chamber at air saturation is shown as a negative value. To avoid this apparent artefact, the "O2 slope uncorr." is selected to be shown while the chamber is open. Only Graph Layouts that display "O2 slope uncorr." are suitable for assessing the stability of the oxygen signal when the chamber is open. Such Layouts are:

The observation of a zero flux with an open chamber is an important performance parameter. It indicates that thermal stability and equilibrium of oxygen between the gas and aqueous phases have been reached. Therefore no experiment should be started before a zero "O2 slope uncorr." has been reached with an open chamber. The suggested criterion for signal stability is a "O2 slope uncorr." between -1 pmol/(s mL) and + 1 pmol/(s mL).

Instrumental O2 DL-Protocols (DLP) are used for calibrations and instrumental quality control, typically without experimental sample in the incubation medium. All Instrumental DL-Protocols available can be found in C:\DatLab\DL-Protocols\Instrumental\ (default directory after installation of DatLab). 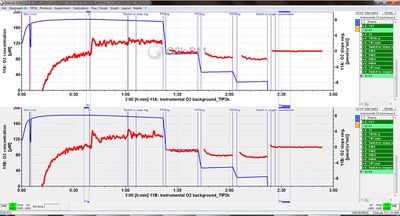 If specifications given in the Instrumental O2 background are not obtained

Check components for locating the problem.

Question: During our run at high oxygen (~400 µM) the chamber won't exponentially oxygenate and won't reach the same level as the other chamber (which contains the same media and was oxygenated with the same syringe). The background calibration is correct as is the gain, stir speed, and temperature. It happens to our O2ks - but different chambers on random different days - and not consistently the same chamber or same O2k. It is usually the same user who processes our muscle biopsies, but I'm pretty sure it's some setting or mistake we're making and not a problem with the actual POS or program. Any help or suggestions are appreciated!

Answer: When you inject O2 for the first time in both chambers there is an identical slope of the O2 concentration line (although the increase in chamber B is slower). In this situation you need to wait for the desired O2 concentration longer in chamber A than B (which is just fine, such O2 increase can be slow since the OroboPOS may have a different response time at elevated oxygen concentration (pointing out the importance of applying correction for Instrumental O2 background). Instead you have injected several times more O2 without waiting long enough for reaching the desired concentration. In fact, that O2 concentration is continuously increasing in chamber B even after the stirrer test. We recommend to close the chamber immediately after reaching the target concentration (~400 µM for pfi), which displaces the gas phase and stops the equilibration process.

Additionally, your observed issue can be as well related to one or more of the following experimental points:

Zero oxygen concentration reached but 'Instrumental_O2_background_TIP2k.DLP' is not finished