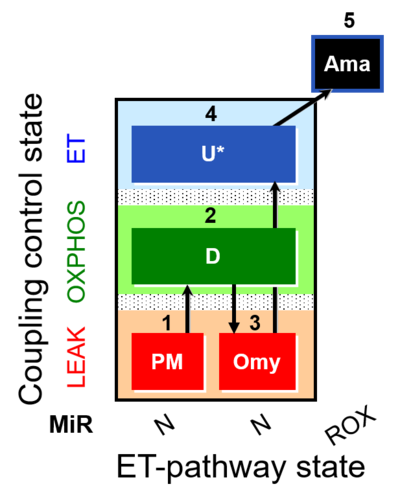 SUIT-006 AmR mt D048 is a short protocol to study simultaneously the O2 flux and H2O2 flux (with the fluorescent dye Amplex UltraRed), in particular to study the dependence of H2O2 flux on the mt-membrane potential. In this protocol , the NADH Electron transfer-pathway state can be assessed in mitochondrial preparations such as isolated mitochondria, tissue homogenates (except of liver homogenate) and permeabilized cells (already permeabilized when they are added to the chamber) in a wide variety of species and tissues. After addition of the NADH-linked substrates, the addition of ADP depolarises the mt-membrane which leads to the decrease of the H2O2 flux. Oligomycin (Omy) is used to induce a LEAK state of respiration via the inhibition of the ATP synthase. Omy hyperpolarises the mt-membrane resulting in increased H2O2 production, while the addition of the uncoupler decreases the H2O2 generation owing to the depolarisation of the mt-membrane. Since higher concentrations of Omy can decrease the ET state induced upon addition of uncoupler, the optimal concentration of Omy has to be determined.

According to our results, the H2O2 production is linearly dependent on the O2 concentration in MiR05-Kit, therefore, during the measurements the O2 concentration has to be well-defined. In this protocol, we suggest not to go under ~100 µM O2. SUIT-018 AmR mt D041 has been designed to study O2 dependence of H2O2 flux in mitochondrial preparations.

+ Reasonable duration of the experiment.
- CIV activity cannot be determined and cytochrome c test cannot be performed together with the fluorescence dyes.
+ This protocol can be extended with the Complex IV module in the following protocols: SUIT-006 O2 mt D047.
+ Cytochrome c test can be performed in the following protocols:SUIT-006 O2 mt D047.
- This protocol cannot be runned with liver homogenate.
- Omy concentration has to be determined. Higher concentrations of Omy may inhibit the ET state.